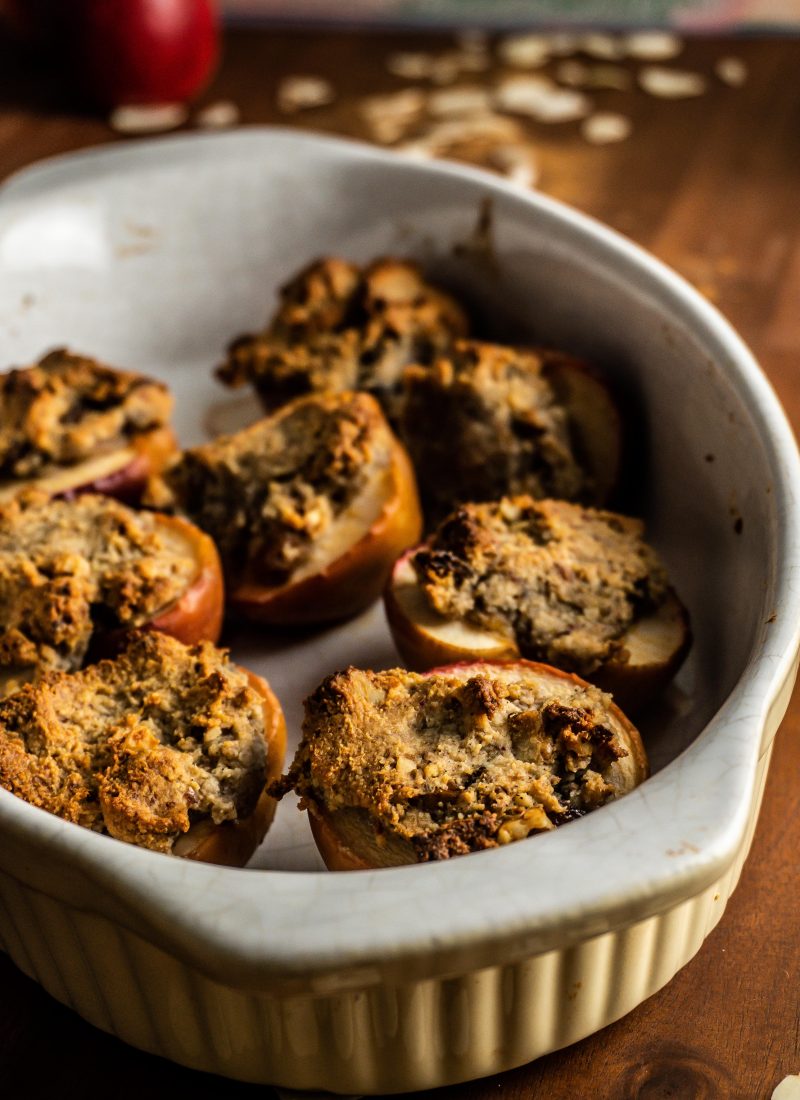 I am in love with this simple Baked Apples with Cinnamon Sauce recipe and I know you will soon be too 🥰! This recipe was developed on the backbone of a dessert I once had at lunch at a canteen. It had all of the main ingredients of this one. Apples, a marzipan-like filling, walnuts, and raisins came together in a glass, covered in cinnamon sauce. I knew I wanted to re-create this the minute I had tasted the first bite! Even though the recipe comes in a completely different format, it does not lose any of its rustic, delicious taste.

Just look at the gorgeous color of these apples!! Those were not digitally enhanced, but are simply a beautiful, shiny, red. I was lucky that my friend gave us apples this year from her garden and they are so sweet, crispy, and delicious. They worked perfectly in this recipe, but you could also use a slightly more sour apple variety, like a granny smith for example. I am sure that would balance really nicely against the flavors of sweet filling and the cinnamon sauce.

The filling of these Baked Apples with Cinnamon Sauce is similar to Marzipan. In fact, I used the base from my Marzipan Potatoes. It is softened dates, mixed with ground blanched almonds and a little bit of water if they don’t come together immediately. You then add a touch of vanilla, a handful of chopped walnuts, and raisins (optional – I know not everybody likes them 😉). Boom! Simply fill the apples, put into the oven, and wait for the magic to happen. Side warning: Your house will smell AH-mazing whilst these are baking. And I am talking water running in your mouth amazing!

Why are these Baked Apples with Cinnamon Sauce good for you?

As the old saying goes: “An apple a day keeps the doctor away!”. Apples contain quite a bit of fiber, are high in Vitamin C, Potassium, as well as the plant compound polyphenol. Be sure to leave the skin on, as at least half of the below-listed benefits are found in the skin, or close to the skin. Pectin, the fiber found in apples, is a prebiotic and is a great feeding ground for healthy bacteria in your gut. A higher fiber diet has been linked to a lowered risk of heart disease. In addition, the specific polyphenols found in apples are linked to potentially lowering blood pressure levels. Apples also contain a polyphenol type called “Quercetin”. Quercetin is known for its anti-allergic properties, coupled with the ability to reduce inflammation. Thus, quercetin may be able to protect your lungs from oxidative damage and may even fight asthma.

Dates come from the date palm tree and are grown in tropical places around the world. You can usually get them dried in Western countries. Dates contain quite a bit of fiber, as well as Magnesium, Manganese, Potassium, Copper, and Iron. Fiber, as mentioned above, promotes gut health. The fiber found in dates slows down the digestive process, which also means that your blood sugar levels are not spiking from eating dates. In addition, dates are stock full of different kinds of antioxidants. If you are regular here, you know that antioxidants protect us from free radicals, which ultimately (if accumulated in the body in form of oxidative stress) can lead to disease building.

The antioxidants found in dates are three-fold. Flavonoids are great in reducing inflammation and may be particularly beneficial against Alzheimer’s disease, diabetes, and some cancers. Carotenoids are particularly beneficial for the heart and may also protect against degenerative eye diseases. Phenolic acid is also highly anti-inflammatory and may protect against heart disease, as well as some forms of cancer.

I have long joked that if this blog was not called Life & Lem🍋ns, it would likely be called Life & Cinnamon. Why? Because cinnamon is not only an amazing, delicious, and quite versatile spice, but it also has some top-notch health benefits. Cinnamon has several strong, medicinal properties. It is not only anti-inflammatory, but also has antimicrobial, and anti-bacterial properties. Cinnamon also contains polyphenols that act as antioxidants in the body. In addition, cinnamon has an antidiabetic effect by increasing the sensitivity to insulin and thereby reducing insulin resistance. It also interferes with digestive enzymes, which slow down the digestive process and allow less glucose to enter the bloodstream. Whereas cinnamon’s anti-cancer effects have been tested in the majority in a test tube setting, they show promising signs of becoming highly effective in the future once better understood.

This recipe is vegetarian, vegan, and completely gluten-free. It is also paleo-friendly if you do eat a bit of sugar in your paleo diet. Unfortunately, in this instance, it is not nut-free.

And that is our gorgeous recipe of the week! If you love easy, simple, sweet treats – be sure to also check out the Sweet Treats recipe category on the blog, as well as my Cakes and Cookies section. All recipes in both those categories are gluten-free, as well as refined sugar-free as a minimum. Most of them can be adjusted to suit your dietary requirements (just like this one 😉). Do let me know how you like the recipe! I am looking forward to hearing from you – either in the comments below or over on Instagram. Happy dessert time 🤗💕.

Baked Apples are stuffed with a filling before being roasted in the oven and served with a delicious Cinnamon Sauce! Simple deliciousness! 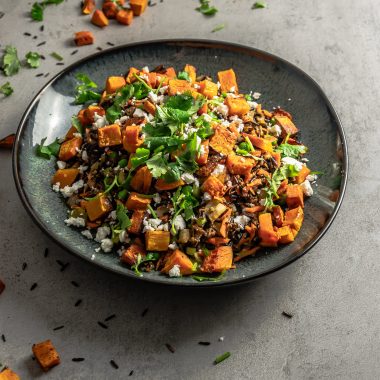 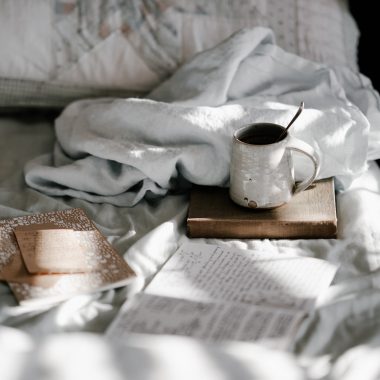 How to establish a good Sleeping Routine