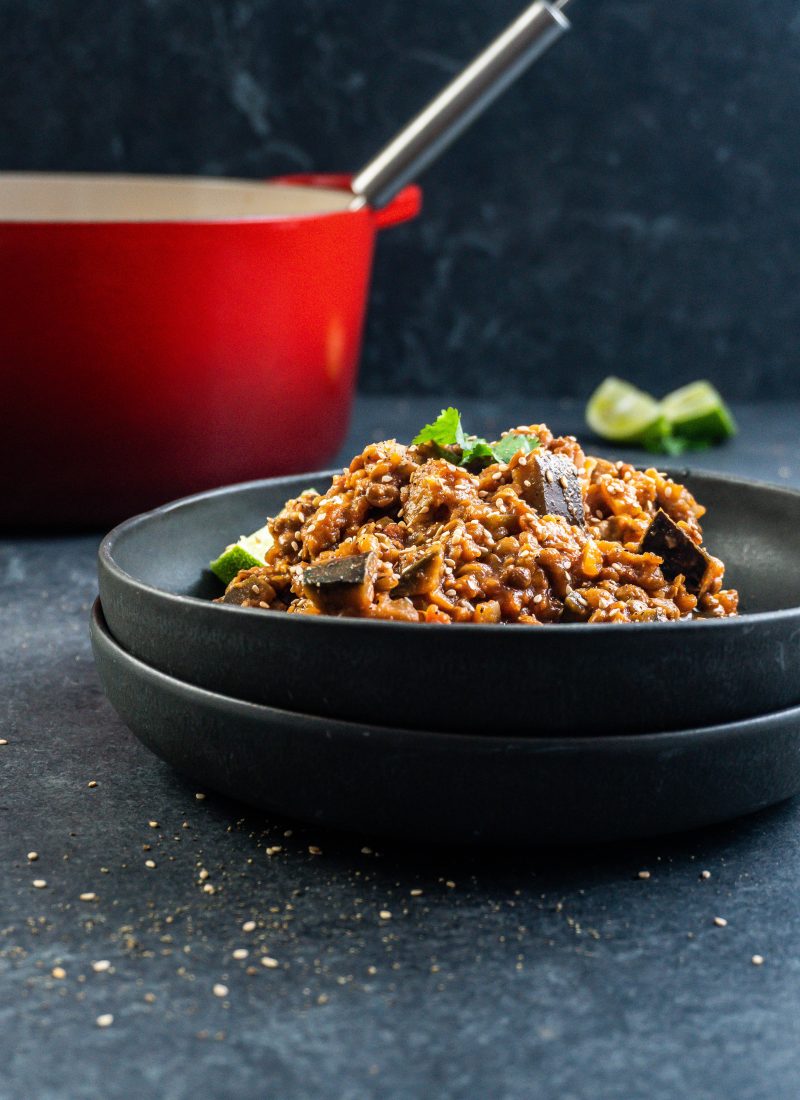 I saw this Aubergine Tagine inspired on Instagram the other day and decided that I wanted to do a similar version. This recipe is the perfect weekday meal. It practically comes together by itself, is super easy to make, creamy, and delicious. It is also packed with flavor and plant-based protein.

The word “tagine” actually has two meanings. It refers to a clay or ceramic pot, which is shallow at the bottom and has a lid that is shaped similarly to a hat. It has been used for centuries in Moroccan culture. Tagine also doubles as the meaning for the dish cooked inside the clay or ceramic pot. Usually meat, fish, or poultry is slow cooked, whereas the “pointy” lid is meant to give back and retain moisture during the cooking process.

This dish is an entirely vegetarian tagine recipe and truth be told, I did not use a tagine cook pot in order to make it. It does not mean that it cannot be equally delicious though! First, onions and garlic are slowly fried off with some cumin, salt, pepper, and a little bit of cayenne. Afterwards, you add aubergine, canned tomatoes, and brown lentils and let everything simmer until cooked. Add a bit of additional creaminess with tahini and serve with fresh coriander, lime juice, and a dollop of yogurt. Yum!

Why is this Aubergine Tagine good for you?

Whether you call it aubergine or eggplant, they have some amazing health benefits that I wanted to highlight today. Aubergines belong to the nightshade family and are therefore closely related to both tomatoes and peppers alike. They contain seeds, which technically makes them a fruit, even though they are most often used in a vegetable way in our kitchens. Whereas we are most familiar with the deep purple aubergine variety, they can range in color from red, green, to – even – black. Aubergines are rich in manganese, potassium, vitamin C, and vitamin K. Manganese is an amazing and vital micronutrient. It helps our bodies form connective tissue, bones, and supports blood clotting properties. It is also important for calcium absorption and blood sugar regulation.

Aubergines are, of course, also full of antioxidants (as are all fruit and veggies). The ones found in aubergines are mainly anthocyanins, an antioxidant which basically provides the eggplant with its deep purple color. In particular, an anthocyanin called nasunin, which has been shown to inhibit lipid peroxidation. If you are as unfamiliar as I was with this word, it basically means that it stops lipids in your cells to degrade. Degradation can lead to either cell damage, or, ultimately, cell death. The antioxidants in aubergines may also play a role in your heart health. Initial animal studies showed that when consuming aubergine juice every day, your “bad” cholesterol levels and your triglyceride levels went down. Not too bad for this small humble vegetable, am I right 😉?!

How can I adjust this Aubergine Tagine to my dietary requirements?

This recipe is vegetarian, gluten-free, dairy-free, nut-free and vegan. Due to the lentils used, which are considered a grain, it is, sadly, not suitable for the paleo lifestyle.

Similar Recipes on the Blog

There are so many other easy “one-pot” dishes on the blog. Be sure to also check out the following:

And that is it for this week! I hope you enjoy this delicious aubergine tagine as a comforting quick dinner as much in your home as we did over here. As always, please let me know what you think by either commenting below and/or rating the recipe! I love hearing from you!! Happy tagine-making 🤗.

Easy to make, creamy, delicious and packed with plant-based protein. Enjoy this Aubergine Tagine as a quick one-pot weeknight meal. 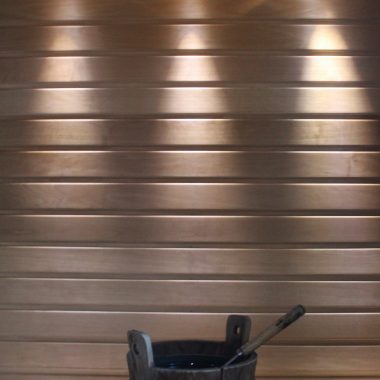 The Benefits of Sauna Bathing