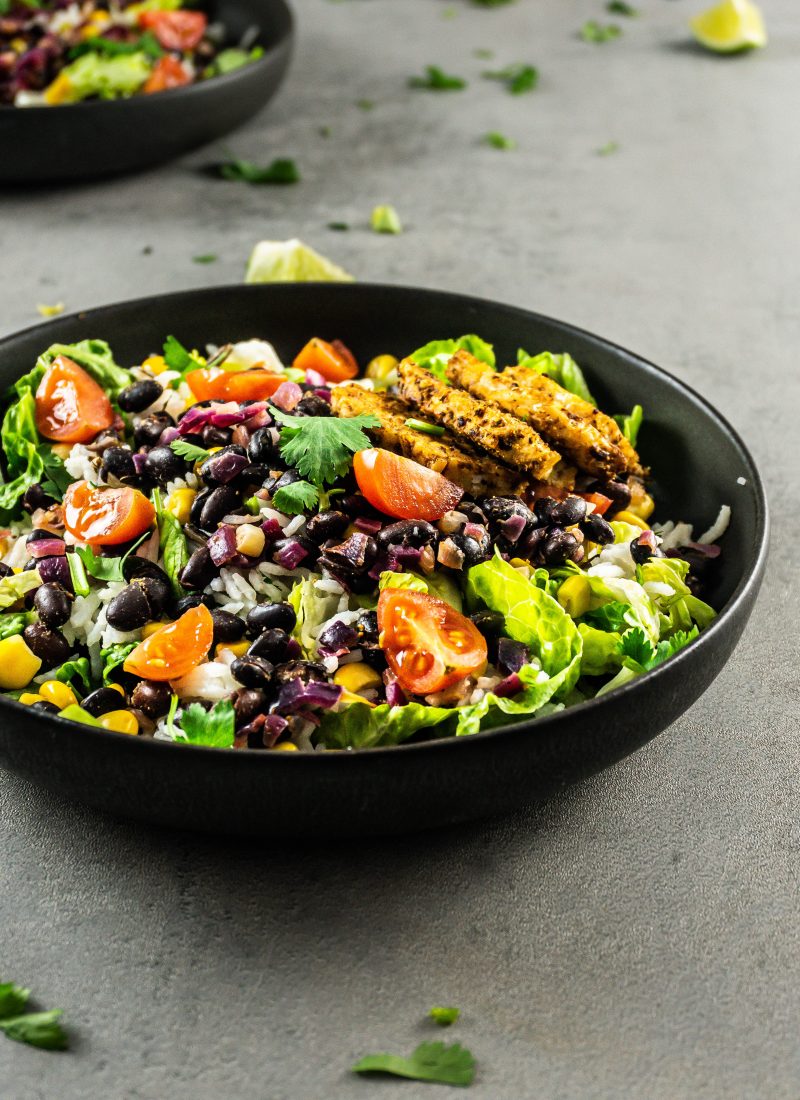 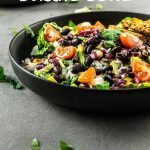 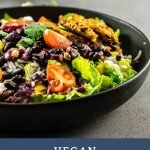 It is another week for a scrumptious, super flavorful main dish: This Vegan Burrito Bowl. I got this recipe inspiration when I went to a Mexican restaurant with friends in the summer (back when we – here in Germany – were still allowed to go to restaurants). It is the same trip where I also got my inspiration for the Very Coconutty and Lime Naked Cake from. There may be a recurring “lime” theme here 😂.

Anycase, a burrito bowl arrived and I immediately knew that I wanted to create a vegan version of it for the blog. What can I say? I am so glad I did, and I am also so glad it turned out because truth be told – I have been testing so many recipes lately and they are partial absolute disasters. Which basically means that they just need a bit more work still in order to get them absolutely right 😉. But… I am digressing. Back to this beautiful dish. This dish has so much flavor, texture, and deliciousness. It is also so colorful which is the reason why I deliberately kept everything kind of darkish-grey colors in order for the food to truly shine. It is then topped of with in spices crusted delicious tempeh, before being slathered on with creamy avocado, lime, and cilantro sauce.

And here is where things slightly went sideways when I added the sauce… I have once again realized that I am simply not that girl who is able to make “flinging sauce on food” look pretty. I have failed with that in pictures before (cue in my Chocolate Banana Pancakes) – so please treat the next shot more like an art painting than anything else 😂. And yes, I possibly could have sat down and meticulously reduce those larger patches of sauce in an editing app – but let us be real. The taste is not altered and your bowl at home would likely look the same (unless you have serious “flinging” capabilities 😉).

Why is this Vegan Burrito Bowl good for you?

Tempeh is, in its essence, fermented soy. Originally from Indonesia, Tempeh contains a good dose of protein, as well as manganese, phosphorus, magnesium, iron, and calcium. Because Tempeh is fermented, it also contains a good dose of prebiotics, which are a type of fiber that is a beneficial feeding ground for our good gut bacteria. The fermentation process allows Tempeh to be better digested, whilst at the same time absorb more nutrients from the food. Because Tempeh is a whole food soy product, research indicates that it may also be beneficial for our heart health. Tempeh contains a phytonutrient called “isoflavones”, which has been associated with decreased cholesterol levels. The proteins found in Tempeh may also have an antioxidant, anti-inflammatory effect, which appears to also reduce blood pressure levels. There is also some indication that Tempeh has a moderate effect on improving blood fat levels.

Technically in its peak from May through to October, Limes are not only super delicious but also a powerhouse in drawing out other flavors (which is why we are using it so generously in this recipe). Limes are high in Vitamin C, which is a super important vitamin and antioxidant for our body. Vitamin C not only supports our immune system but also helps with the absorption of iron, fights free radicals and oxidative stress, as well as supports the build of one of our most critical structural proteins – collagen. Limes contain both antioxidant and anti-cancer properties.

The flavonoids (a type of antioxidant) found in Limes have shown to stop cell division in many cancer lines. There is also some recent research suggesting that lime juice may be able to alter the cell cycle. In particular, it appears to change the decision as to whether a cell devides or dies. Last but not least, Limes also have displayed an anti-biotic effect. In West Africa, the inclusion of lime juice with the main meal appear to stop the contraction of cholera (a disease triggered by bacteria in the gut).

Also sometimes called coriander, this herb is a superpower for our health! Cilantro is actually related to parsley, carrots, and celery. I absolutely adore Cilantro but not everyone does. There are some people who claim it tastes like soap. If you are one of those people – there is actually an explanation for this phenomenon and it may well be due to a certain set of genes. This gene allows you to pick up the smell of aldehyde chemicals, which can also be found in soap. Next to this interesting quirk, Cilantro has antioxidant, anti-diabetic, and anti-microbial properties. It is also loaded with Vitamin K1. Vitamin K1 is super important for both our bone health and our ability to properly clot blood. It may also aid in lowering blood pressure levels and may be linked with improved memory function in elder adults.

How can I adjust this Vegan Burrito Bowl recipe to my dietary requirements?

This Vegan Burrito Bowl is gluten-free, vegetarian, vegan, and nut-free. Due to its grain content and use of soy, this recipe is, unfortunately, not suitable for the paleo lifestyle.

And there you have it for this week 🤗! I took the liberty to update my recipe card plug-in this week (basically the recipe you see below). You can now rate the recipes, which will hopefully allow more people to find them going forward. So, if you do or did enjoy the recipe – please leave me a rating below! As always, I also love to hear from you both in the comments section below or over on Instagram!

This Vegan Burrito Bowl recipe is easy and delicious. The different colors practically jump at you from the plate! Enjoy! 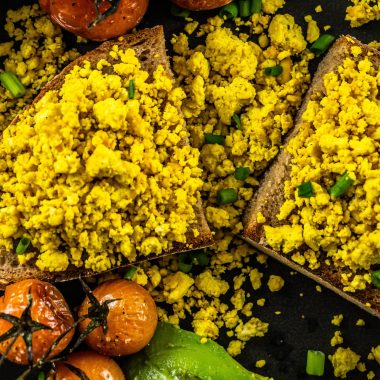 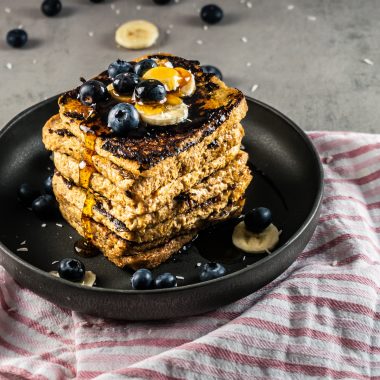